...The Maestro of Percussion 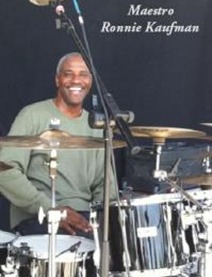 A native of Los Angeles, California, Ronnie started playing drums when he was a young boy. Ronnie completed his music studies at Pepperdine University, majoring in Music Performance with an  emphasis in Percussion. His professional career began at an early age as well, becoming the original drummer for the famed R & B/Funk group the GAP Band in 1979 when he was 19 years old. He toured and performed with the GAP Band for more than 5 years, performing on such hit songs like "Yearning For Your Love". "You Dropped The Bomb On Me"', "Oops Upside Your Head", and many more. Other tour and performance credentials include such music greats  as The Emotions, Bobby Womack, Rene & Angela, Ronald Isley, Jean Carne, Roy Ayers, Nancy Wilson, Yarbrough & Peoples, and more. Ronnie has mastered many genres/styles of music, and has performed in stadiums and concert arenas all over the world.Ronnie has also performed with Symphony Orchestras, Awards Shows, and Stage Plays. His music and performances have been a constant force of nature in American music since the beginning of the 80's, and he is still one of the most sought after drummers in the music industry today.

View on Mobile
Send Newsletters to your fans from ReverbNation.com